The idea behind this thread is to compile any insights we have about each others portfolios into one place.

Feedback can also extend beyond visuals, such as content or performance.

Just make sure you clarify what it is you want feedback on, it’s difficult to give feedback when you don’t know the context or the scope.

When giving feedback, try to include screenshots so that if the portfolio changes, it’s still evident what is being talked about.

This is my portfolio: kv.ax

I’d like to receive some feedback on whether you prefer to use dark or light color schemes for portfolios, and if your system default is different from that.

For example: I use a dark color scheme in my operating system, but I prefer reading content in a light color scheme.

Another thing I’m interested in is page performance. Did it feel fast and snappy, were you on a slower connection, etc.

If there’s anything else you want to comment on, feel free to mention it.

Thank you for kick-starting this thread off. While there is a recent trend towards the return of dark backgrounds (both on mobile & in portfolios), I feel both white and black are equally good choices. I had a friend recently implement a dark mode toggle & recently there have been more dark background portfolios on http://bestfolios.com.

The page does load fast.

I would love to hear feedback on my portfolio! I looking to change things up to maybe one page (intro>projects>visual work>about me>experience timeline) but I want to hear what you guys have to say first. I want to make sure this looks good for when I meet people at the conference next week

I had a friend recently implement a dark mode toggle

A recruiter will most likely open your first project. In this it is coinme and the initial image for the case study is that of your team. I would recommend shifting the picture of you and your team below and putting a cover image of the UI you designed or something more relevant to the project.

Actually my analytics show that my third case study is the first thing people open! Regardless, I didn’t work on the visual design of the project, so including a final mockup there seemed irrelevant to me, though including a wireframe there could be an idea.

When I go to https://kv.ax/coinme-pdf , it does not render the PDF for the entire page height. (attached an image for this)

I don’t see an image attached but I have an idea of what you’re saying, the PDF is meant to supplement the main case study in a slide deck format, so it’s formatted as a presentation rather a webpage. Correct me if I’m assuming that wrong.

I really appreciate all the critiques, I’ve only mentioned ones that I wanted to follow up on, but I appreciate the comments all the same!

The navigation to me looks unstyled, it wasn’t apparent to me that they were links. I also expected that the links on the right side would keep me on your website.

The content only animates in when I’m already significantly scrolled down, it’s a bit distracting. 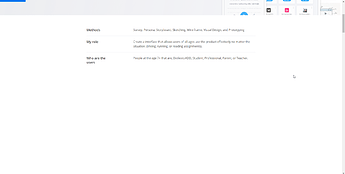 I’m a bit confused about what you mean by changing things up to one page. Could you clarify that a bit?

Thanks for the feed back!

For the navigation, I do agree and plan on fixing that when I combine “projects” and “about me” in one page. What I mean by that is i’m thinking of making everything on one page so that recruiters can just grab the information an go. This also includes sharing more visual design work I have done and giving them my journey of what I have been up to.

Thank you for letting me know about the scrolling, I will see abut making the content appear sooner.

Interesting, that definitely seems like an unconventional approach so you want to be careful about how you approach it. One consideration would be to have navigational links to different anchor points on the page since it’ll be longer and content is hidden below the fold.

It would be interesting to test it, but I think it’s best to explore it after your meetings.

I’m loving all of this peer support. Thanks for starting this thread, Konstantin! Keep up the great work, everyone!